While doing a passenger mission, I came across the white dwarf star which graces the top of this article. It was beautiful and immediately made me want to do more exploration.

Right there I decided that after I finish my current mission I would have my trusty Hauler transferred to my current location, which I had kitted out for exploration some time ago. I made it bare bones and light, with the best Frame Shift Drive and Fuel Scoop, allowing me to jump 27 light-years (LY). I put an Advanced Discovery Scanner on it for good measure.

I had a plan, but where to go? Initially I thought perhaps I should go in the direction of Barnard's Loop but soon decided against it because the distance was just too great (it was 1,500 LY away) and it would take too long to cover it, plus I would have to do much more planning in terms of fuel scoop-able stars along the way, since the Hauler only has a 4 tonne fuel tank.

After some digging around to get some ideas of where to go, I saw that the Voyager probes, both Voyager 1 and Voyager 2, are actually in the game. I immediately knew that is where I was going. 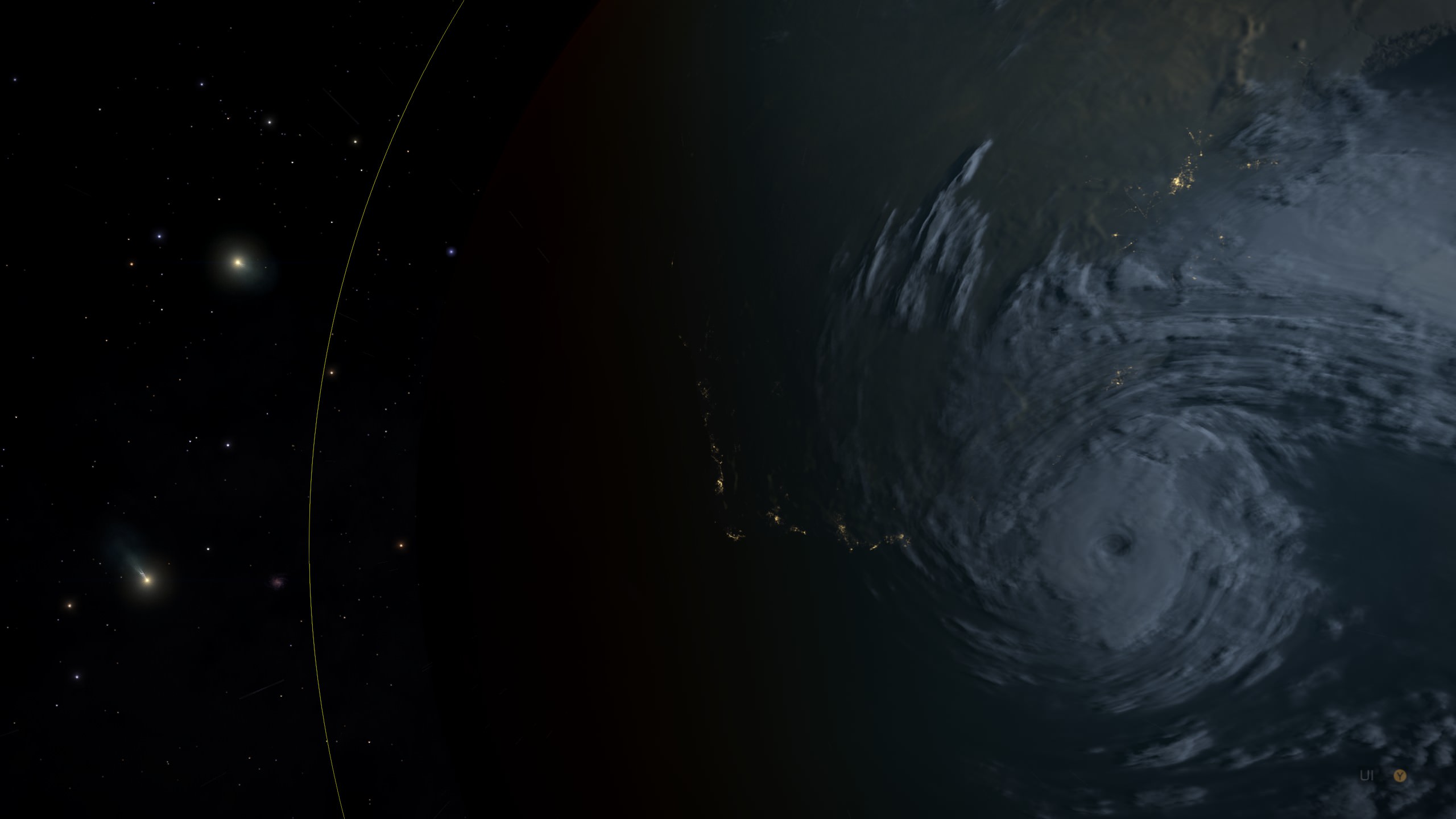 Now the trick was to figure out where to find the probe. There was an easy-to-follow video on YouTube so I decided to go with that. You jump to Sol, search for the Beronii system and fly towards the system in Supercruise until you are about 2,317,000 light-seconds (Ls) away from Sol. You then need to do some star alignment and then find the probe. Easy right?

Wrong. It takes you about 30 minutes just to fly out that far and then after getting there, doing the star alignments takes another 10 minutes. Only then can you start searching for the probe. I couldn’t find it. I searched for about an hour and found nothing but Unidentified Signal Sources. I started searching the Internet and I came across an old post from 2016 which explained how to find the probe, however he had a different method from what is used in the YouTube video. I tried using it while being 2,317,000 Ls out already but decided it would be futile. I would have to reset and try again.

The 2016 post made me think the guy found the probe at 2,310,000 Ls, while the YouTube video found the probe at 2,317,000 Ls. Obviously the probe is moving in-game, my thought process went, and I would have to calculate the current distance. After wasting more time, (and in an attempt to keep this story short[er]) I was wrong. It hadn’t moved and my bright spark moment turned out to be a dud.

After more searching, I finally found a much newer post from February 2018 where the poster said they had found the probe a mere month ago and it was at a distance of 2,317,434 Ls. This at least confirmed that the probe distance had not changed with the updates and patches and that the probe did not move in real time in the game.

In the end, I had to combine what the person in this post did with what was done in the YouTube video. I used the first 3 steps from the post but made a change to the fourth; I traveled to a distance of 2,317,434 Ls and stopped dead (i.e. 30km/s).

I then swapped to the part of the video where he aligns the stars (all of which should be correct at this stage apart from the small star which needs to sit on Sol’s 10:30 position). So you need to do some “horizontal” and “vertical” flying to get the star at the correct position, while doing your best to maintain a constant distance from Sol. The video states that if your ship goes right, the star moves left, if you ship goes up, the star goes down and vice versa. I found this to not be true; if you want to move the small star left, you need to travel to your left (left as you look towards Sol).

Once I had the small star in the correct position and my distance was 2,317,434 Ls from Sol, the signal appeared in my Navigation screen. There it was, 660 Ls away, the Ancient Probe.

Fly towards it and disengage Supercruise, however note that the nav point is out about by about 1 km. Look for a grey indication on your radar and point your ship towards it. That is where you will find Voyager 1.

It is a marvelous moment and the probe is very detailed. It also plays the recording which is found on Voyager 1 in all the various languages. A well-spent 3 hours to find this gem, and I also learned something in the process.

Voyager 1 in the game is not where it is in real life[1]. For some reason the probe is located in a different direction and so far, Frontier has not explained why this is.

I'm sure I had some luck on my side during my second attempt, however I'm definitely not flying that far out for a third time to test my method to see if it is foolproof. Safe flying Commanders! 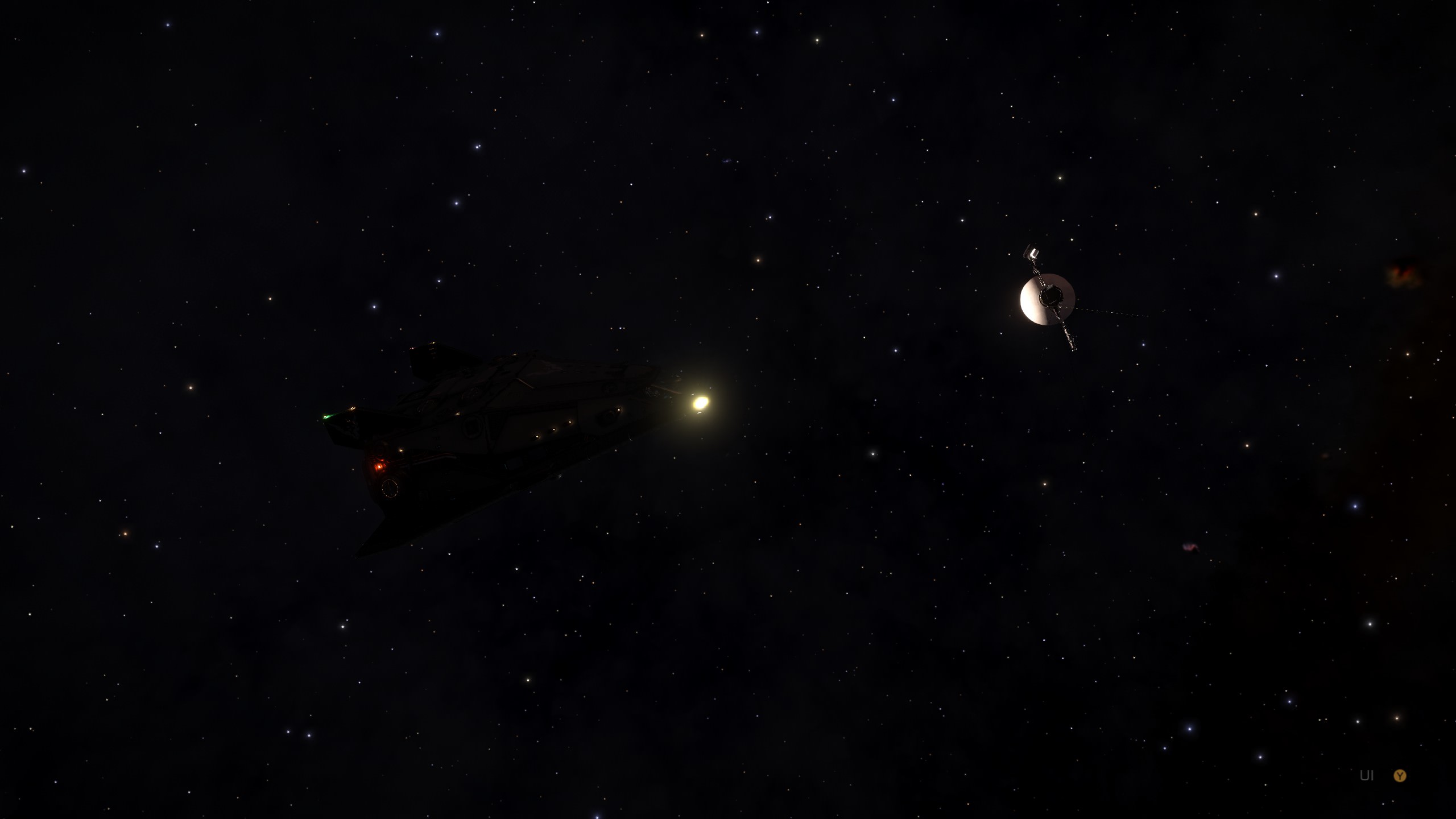 The golden plaque on the side of Voyager 1 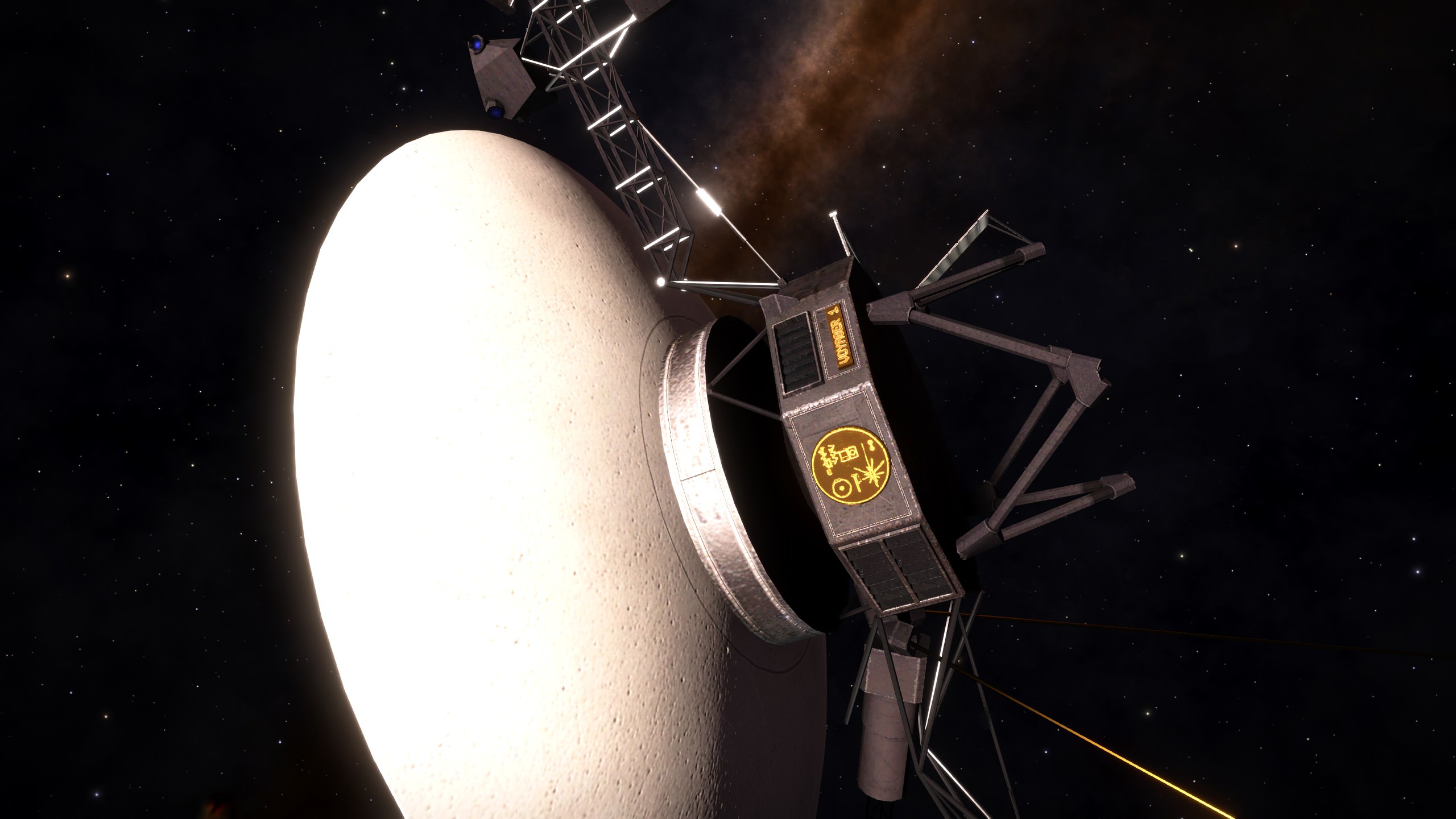 Looking back from Voyager towards the Sun. 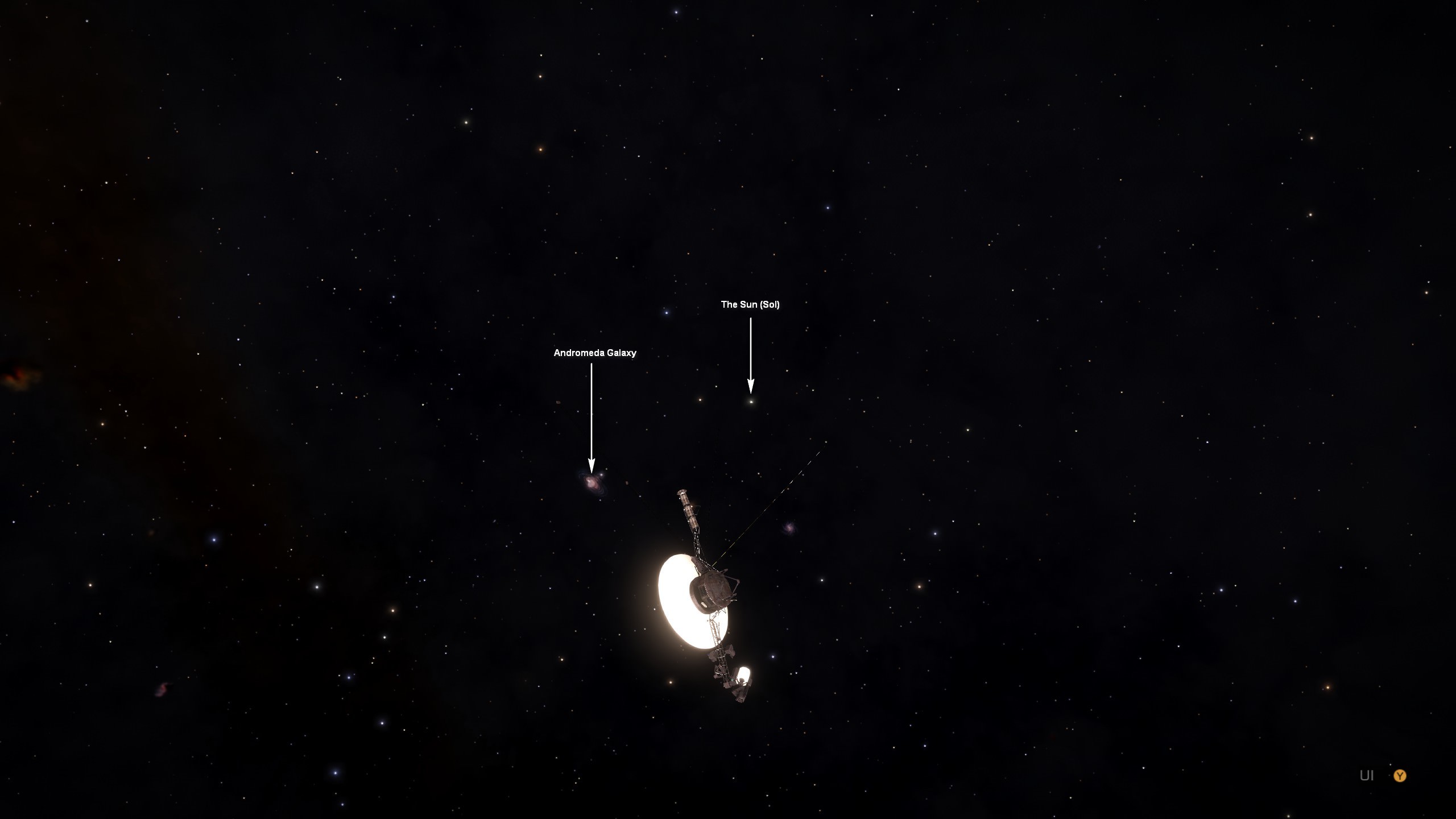