Digital Extremes has ambitious plans for Warframe, including an engine upgrade and epic space battles that connect players in different areas of the game together. The studio showed 40 minutes of live gameplay with a recent development build of the game at TennoCon 2019, its annual Warframe-focused convention.

Steven Sinclair, creative director at Digital Extremes, spends a few minutes at the start of the demo showing off some of the improvements the new engine offers: real-time shadows, completely new reflection system, new materials, and new art. As shown in the demo, these changes unquestionably improve the overall visuals of Warframe.

The remainder of the demo is focused on Warframe: Empyrean, an upcoming addition to the game formerly known as Railjack.

If you are looking for the "wow" moment, skip to the section titled "Squad Link" below, or around 28 minutes in the  YouTube video embedded at the end of the article.

Over the course of the demo, Sinclair gave more detail about how Railjack's systems would work:

What we want you to do for Empyrean is get in your ship and fly seamlessly [from mission to mission], but those missions actually have Void Storms in space, or other circumstances...

You will refer to me as such. Aboard this railjack we work before we play. – Cephalon Cy

This is it. We think this is the game-changer.

One of the big surprises at this year's TennoCon was the announcement of Squad Link. This will allow one squad of players to assist another squad with their current mission. In the demo, the feature was showcased in the battle to assassinate the Kuva Lich.

The crew aboard the Railjack had successfully defeated the Kuva Lich's support fleet, triggering the next phase of the fight. The Lich activated a Disruptor Field which was beamed around his ship from the surface of the nearby planet: Earth.

To disable the field, the Railjack crew can send a signal asking for help. For the purposes of the demo, a friendly squad was already in position on Earth, in the Plains of Eidolon open world area.

It is necessary to understand that the Plains of Eidolon is a completely different area of the game. The squad that was on the Plains was not connected to the mission that the Railjack crew were playing at all.

"What if we could take our co-op game between people that are in the same session and connect them to other co-op games happening in real-time all across the game?"

The demo shows that to activate Squad Link, players who are interested in grouping up must place a beacon to search for other squads that are in need of an assist.

The mission that has the Squad Link component available—in this case the Railjack-based Kuva Lich assault—scans through a prioritised list for anyone willing to help you out: friends, clan mates, and alliances.

Upon finding a friendly squad that has deployed a Squad Link beacon, the game brings up a quest dialog for the team who agreed to help out, offering a reward for their services. The demo showed another new resource as a reward: Isos.

After accepting the invitation to help, the Squad Link beacon disappears and the mission begins.

Sinclair explained that Squad Link is not compulsory for the Railjack team. They would be able to continue on their mission without Squad Link if they so chose.

"It is not a hard barrier," he said. "But it's a much more difficult situation [without Squad Link] and doesn't have the Squad Link resources and rewards associated with it."

Fair warning: The end of the demo contains spoilers for anyone who hasn't finished The War Within quest.

The full gameplay demo for Warframe: Empyrean at TennoCon 2019 is embedded below. 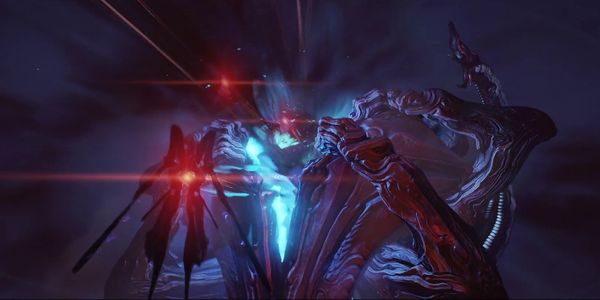 Digital Extremes has published a new trailer and announced a launch window for The New War.